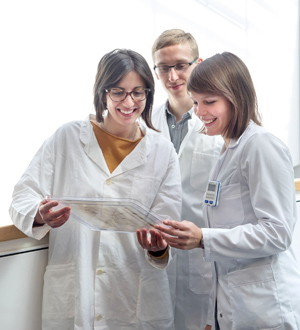 Magdeburg has a long tradition in neuroscience research that started with the seminal work published by Hans-Jürgen Matthies and associates on the mechanisms and characteristics of LTP in the 1970’s and 80’s. After reunification the German Science Council strongly recommended to build up on this tradition and to create a neuroscience campus that combines this tradition with cutting edge new technology and novel approaches at all levels of investigation ranging from functional brain imaging in humans to the study of signal molecules in synapses. Over the last 20 years Magdeburg has become one of the high-profile neuroscience centers in Germany with a major strength in Integrative Neuroscience. This focus is documented in our local cooperative research projects (SFB 779, SFB 854) and graduate school (GRK1167, LGS) as well as our participation in transregional research projects at the national (TRR31, TRR62,) and international level (NPlast, etc.).

A particular strength on our research activity lies in the tight collaboration of the Otto von Guericke University with its partners the Leibniz Institute of Neurobiology and the German Center for Neurodegenerative Disorders, which is bundled in the CBBS. As a graduate student you become part of a striving and multidisciplinary group of researchers working at the frontier edge of neuroscience research.

Magdeburg is the capital of Saxony-Anhalt, with some 230.000 inhabitants today actually the second most greenest city in Germany. With its familial atmosphere and affordable rents it is an attractive place for its 20.000 students.
In the city you can experience Magdeburg’s rich history back to when it became the imperial seat of king Otto I. in the late 10th century. The magnificent romanesque cathedral dated back to the year 1207 and the almost 1000 year old monastery “Unser Lieben Frauen” are today’s most prominent witnesses to Magdeburg’s importance and wealth in the middle ages. The nearby “Hasselbachplatz” with its art nouveau buildings is one of the most favorite places in town for student’s living and entertainment downrown and the “Breiter Weg” just north of it providing central shopping facilities.
Magdeburg is a very green city, with its numerous parks and the river running just in its middle. Several theaters and an internationally recognized puppet theater provide a diverse cultural program. Regular events such as the “Europafest Magdeburg”, “Fète de la Musique”, “New Orleans Jazz Festival”, the medieval festival and the great Christmas market set additional highlights throughout the year.

Living and studying in Magdeburg offers you a broad spectrum of leisure activities to quickly settle in and get familiar with the city. An overview about all upcoming events and activities in sports, culture and gastronomy in and around MD is published on a regular basis on platforms like dates, urbanite and magdeboogie as well as on the municipal website of the city Magdeburg and the event calendar of the mvgm.

Friends of theatre, art and exhibitions will find a wide range of cultural activities in the Theater Magdeburg, the “Theater an der Angel”, the “Puppentheater”, in the “Moritzhof” and at numerous museums of the city. Every semester you have the opportunity to sign in for Campus Sport from the Otto von Guericke University or become active by exploring the Elbe cycle route. Several intercultural organisations such as the KanTe e.V., IKUS and the Studentenwerk organize and support creative activities to connect international and German students and to fill Magdeburg with life. The culinary highlights and nightlife of Magdeburg you can discover on one of the markets or streetfood festivals and in many bars, pubs and restaurants around the Hasselbachplatz.

Magdeburg has much to offer in the field of Neuroscience. Well-equipped laboratories, good research and nice people convinced me to conduct my Ph.D in Magdeburg.

The first months I had the chance to stay in accomodations that are provided by my institute. So it was very easy for me to start my life in Magdeburg and I had enough time to look around and find an own place to live.

Apart from the good scientific environment, there are many green areas close to the river that are great for doing sports or BBQ in summer. Many students make the city more appealing to young people and the rents are comparably low in Magdeburg.

I am half Turkish half American. I grew up and studied in Turkey and came to Germany from there.

After my bachelor’s, I wanted to continue my studies in the neuroscience field. The Integrative Neuroscience Masters program in Magdeburg offered a wide range of courses introducing every aspect of neuroscience which gave me the opportunity to decide in which direction I would like to pursue my scientific career.

Pursuing my master’s degree in Germany increased my chances for staying in Magdeburg for my Ph.D. Settling down in Magdeburg was also quite easy as the intercultural student organisation (IKUS) of the university helps with most of the important aspects of moving to a new city.

I like that Magdeburg is fairly small and it is easy to go around in the city, especially with the bike. It is also a student-friendly city where rents are cheap and life costs are low.

I am from Lahore, Pakistan.

The University of Magdeburg is one of the leading universities in Germany, when it comes to field of Neuroscience. Well renowned research centers in Magdeburg and a highly respected degree opted me to join. Importantly, studying is easy here for non-German speaking students like me.

There are lots of foreign students in Magdeburg and it is actually very easy to prepare oneself to stay during studies. The university webpage and facebook pages are helpful. I contacted the Studentenwerk and had a stress-free settling.

Moderate living costs and the availability of student housing are big advantages in Magdeburg. It is a small city, easy to move around and a safe place for international students. I have a calm city to live that actually helps a lot to concentrate on studies.

I was born in Bernburg, a small city in Sachsen-Anhalt. During my childhood I moved a lot and was living in Gießen, Marburg and Frankfurt.

I have family nearby and wanted to see them more often. Also being a student is very affordable here and I wanted to have at least some money to spend in my free time. Also the rent is not so high in Magdeburg.

I did not prepare so much. Just looking for a nice shared flat and I had a little tour around the city before I moved here.

Magdeburg is a nice town to be a student. You are able to have a nice flat in the city centre or near university. Also there are many other students around and the campus is very international. For you free time, you can spend time in the parks. It is very green in Magdeburg.